The 2015 – 2016 NBA season is rolling as the New York Knicks return to Madison Square Garden to take on the best ballers in the world.  The NY Knicks are off to a strong start (compared to last year’s 17-65 record) and are 16-19 through 35 games.  In a newly strong NBA Eastern Conference, they’re going to need to finish above .500 to make the playoffs.  All-Star Carmelo Anthony leads the team with averages of 21.5 points, 7.5 rebounds, and 3.6 assists.  Knicks fans are getting excited about their 4th overall 2015 draft pick: Kristaps Porzingis.  The 20 year old Latvian center is listed at 7’3” and weighs 240 lbs.  Porzingis leads the Knicks with 8 rebounds/game and 2 blocks/game, and is third behind to Melo and Aaron Afflalo (13.7) with 13.1 points/game.  Knicks fans have been chanting ”Por-zing-is! Por-zing-is!” and he is second on the NBA rookie ladder for 2015-2016 NBA Rookie of the Year. Kristaps Porzingis was also nominated for the Kia Eastern Conference Rookie of the Month in December.   There’s nothing quite like watching the Knicks at the “Mecca of basketball,” Madison Square Garden.  When you’re going to MSG to see the Knicks, Gotham Limousine has you covered.  Our NY Knicks limousine service to Madison Square Garden makes the whole experience even better!  We will get you to and from the Garden with safety, style, and fun as our top priorities.  Check the NY Knicks schedule and get your group together.  There are many options for individual Knicks tickets available from $67 for mezzanine level seating up to $736.25 – $3,706.50 for courtside seating.  There are also season passes, group tickets, partial plans, lounges, and suites available for the 2015 – 2016 NBA season.  Here are the New York Knicks home games at Madison Square Garden before the NBA All-Star Game: 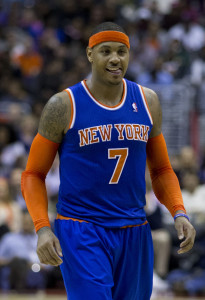 The remaining home games at Madison Square Garden for the Knicks after the All-Star break include some stand-out games to set your calendars for in 2016 include:

Gotham Limo’s NY Knicks limousine service to Madison Square Garden has a large selection of Knicks limos to choose from.  Picture your party in a 10 passenger Lincoln MKT stretch limo, 6 passenger Cadillac Escalade, or Mercedes S550.  Call 212-729-7001 or book secure online reservations for your next NY Knicks limousine service.  For other NYC sporting event limo services, check out our recent blog New York Sports Limousine for the 2015-2016 Season.  Have an amazing time at MSG and GO KNICKS!